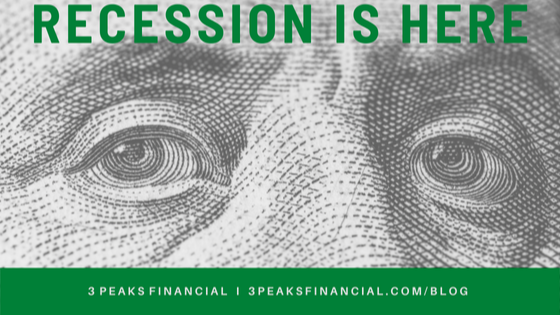 The results are in…The U.S. economy is officially in recession, but what does that really mean? The “R” word can be really scary for a lot of us because we think back to our most recent recession in 2008. Those were hard times for nearly every American, and the possibility of going through it again is daunting to say the least. While recessions are never a joy to go through, they are a normal part of economic cycles and we have experienced them many times over the last seventy-five years. Let’s discuss what recession means and how the U.S. economy has reacted historically.

What is a recession?

For starters, let’s clear up some misconceptions that seem to be flying around in a lot of news articles about what a recession actually is. There seem to be some news or political outlets that claim recession is based solely on job growth, and while those things are affected by recession, they are not considered as part of the technical definition. A recession is defined as a period of time when the Gross Domestic Product (GDP) has a negative growth rate for at least two consecutive quarters. GDP is a measure of the  growth of the economy as a whole because it measures how much we are producing as a collective nation. That threshold has officially been met in 2022 when the reports from the second quarter came in at -0.9% growth after the first quarter was -1.6%. In short, the U.S. economy is indeed in recession.

As we mentioned above, talk of recession quickly takes us back to the most recent one in 2008. While there are and will be some similarities between the two, the severity appears to be pretty different. The economy in 2008 shrunk by -10.6% in the first two quarters of that recession compared to -2.5% in the first two quarters of 2022. The economy also shrank for an entire year from 08’-09’ compared to the recession average of just over 7 months. So, as you hear more about the topic in the news over the next several months, remember that in all likelihood, this recession is not going to look nearly as bad as the last notable recession. After all, there is a reason that 08’ is called “The Great Recession.” It was the largest scale recession since they started tracking them back in 1947.

Now that we have a good handle on where we are, let’s look forward to the next twelve months to see how things have typically gone from this point of a recession forward.

Probably the best news you’ll hear all day is that based on historical trends, the stock market is likely to have a very strong performance over the next year. From this same point in past recessions over the last seventy-five years, the stock market (as measured by the S&P 500 index) has had an average return of 19.2%. That same index over the previous seventy-five years has averaged an 8.3% return. Think of it as a spring being compressed. Eventually the downward pressure will have to be released causing stronger than normal upward force. It appears that we may have seen that start already with a strong month in July from the market as a whole.

High unemployment has always accompanied recessions; however, it has tended to be more of a lagging indicator. In other words, the economy normally shrinks first, and then we see the layoffs and rising rates of unemployed workers. If we look at previous U.S. unemployment at this point during past recessions, we see an average unemployment rate of 7.4% for the following twelve months. That is significantly higher than the most current rate of 3.6%, which means we are likely to see some more layoffs over the next twelve months.

Recession will never be a time of all sunshine and rainbows as far as the economy goes. High prices and lagging supply chains will continue to have an impact over the months to come. However, our overall feeling about the economy long-term is still very optimistic. Especially for our clients and their investment portfolios. If you’d like to hear a second opinion on your investments or financial goals, give us a call to see what kind of value and confidence we can add to your plan.

Content in this material is for general information only and not intended to provide specific advice or recommendations for any individual. All performance referenced is historical and is no guarantee of future results. All indices are unmanaged and may not be invested into directly.

The economic forecasts set forth in this material may not develop as predicted and there can be no guarantee that strategies promoted will be successful.

Investing includes risks, including fluctuating prices and loss of principal.